England came late to the new learning that had become accepted in Italy by the middle of the 15th century. But around the end of the 15th century and the start of the 16th a group of scholars came to the fore that would bring England into the mainstream of a new, northern Humanism. 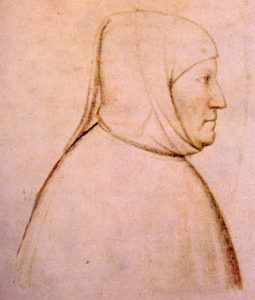 The new learning had at it’s heart Petrach’s belief that proper education should help men to live a good life, a life for which Christ was a model – as simple and ambitious as that. Proponents of the new learning, which has acquired the tag humanism, though the term was not used until the 18th century, believed that in the ancients was knowledge that could bring new ideas to achieve these aims.

Humanism was as a cultural movement, aesthetic, literary and educational, liberation from the old dominant way of thinking. It was a scholarly discipline, the philology of ancient languages, based on textual analysis. And in civic humanism, it held a desire to educate people to help them become positive contributors to the health of the nation.

At no point was humanism an attempt to deny or challenge religion; many of the first humanists were clerics, and through the new learning they firmly believed that the Christian faith would be re-affirmed and strengthened; until the reformation hardened attitudes.

Clearly not an Englishman, Erasmus was none the less critical to the growth of Humanism in England. He came to 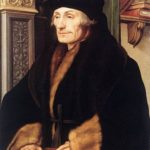 England four  times  – including two visits in 1499 and 1505 invited by William Blount, during one of which he met the young prince Henry. He was in constant correspondence with English scholars, and through his letters made other in Europe aware of their work, and became a friend and correspondent especially of Thomas More. He wrote a satire called ‘The Praise of Folie’ in 1509 which was dedicated to More, advocating returning to a more simple Christianity. Although many of his instincts were in tune with protestant reformers, he remained a Catholic and in later life wrote a brilliant attack on Martin Luther.

William Grocyn (1449-1519) was a cleric, and a scholar at Oxford University, born around 1450. In March 1488, he left the university temporarily and went to Italy and studied there for 3 years. While he was there he immersed himself in the works of the ancients and the latest thinking of the Italian masters, and when he returned in 1491 became the leading scholar in Latin and Greek.  When Erasmus visited in 1499 he was amazed at the breadth of Grocyn’s learning and output. By 1501, Grocyn had become established in London, and was according to Thomas More, his leading light and educator. Quite apart from his learning and influence, when he died in 1519 Grocyn left a remarkable library of manuscripts and printed books in both Greek and Latin, and Italian writers. 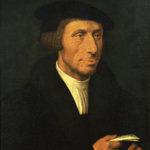 Thomas Linacre’s (1460-1524) life has some similarities with Grocyn; he was probably born around 1460, and also became a scholar at Oxford; just like Grocyn, he left for Italy, this time in 1487, and spent many years there studying, collecting books and manuscripts and writing, returning 12 years later in 1499. He became part of that influential group of early English humanists, along with Grocyn and Colet, also influenced More and met Erasmus. However, he turned his attention to medicine for the rest of his life to his death in 1524.

John Colet (1467-1519)  is probably a slightly better known name; born in 1467, he was of a wealthy London merchant family, who studied at Cambridge before becoming a Cleric. He was described as tall and 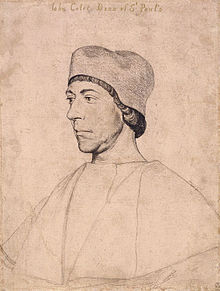 impressive, with a reputation for quick temper and a deeply traditional and conservative Christianity. In the 1490s he also upped sticks and headed for Italy. On his return, he again became part of the Humanist circle and a frequent correspondant with Erasmus, and a powerful and famous preacher. Colet is probably better known as the founder of St Paul’s Schools, founded for the education of 153 boys without fee.

William Lily (1468-1523), born around 1468, and another inmate of Oxford University; he was in fact the Godson of William Grocyn. And, guess what? Around 1490, Lily travelled – though his travels took him first to Jerusalem, then to Rhodes and then to Rome and Italy. I think we have established that theme now. Lily returned to a living in England as a cleric; and around this time he also became a close friend of Thomas More, described by More as his closest and dearest friend. In 1510 he was appointed by John Colet as the master of St Paul’s school; he died while in this job, leaving his most famous bequest, Lily’s Grammar; this Latin grammar book became effectively the only authorised and standard version by the time of Edward VI; and therefore countless school children and sweated and wept over its pages across the years.