Skip to content
You are here
Home > Resource > Thomas Cranmer: A Life by Diarmaid MacCulloch 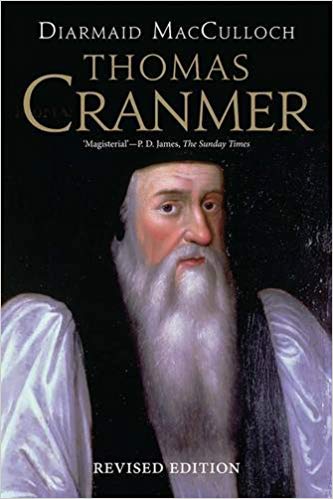 Thomas Cranmer is a central figure in one of the most disruptive events in English history, with consequences that are still  with us today. So it's not surprising that he has been very controversial through history - a figure of same hate for some, and a hero for many. So - on one side, a dishonest, ambitious and deeply political figure, lacking intellectual consistency or integrity, whose views changed according to the political winds. On the other, Foxe's brave and principled martyr, or a later tradition of a mild mannered, moderate man, father of modern Anglicanism steering a humane path between Catholic and Reformed church traditions.

And although these days I suspect the response to his name for the vast majority would  these be 'Thomas who?', for some he still evokes powerful emotion - I have seen at least one Tweet which referred to Cranmer with the words 'I hate that man'.

So Diarmaid MacCulloch's biography is a profound relief; the highest compliment I can pay the book is that it allows Thomas to be seen for who he really was, warts and all, rather than the person we would like him to be. It seems to me, slightly pompously, that with some exceptions the best biography are written by those with a sympathetic eye, but the intellectual rigor to let the evidence define the story. For me this is why MacCulloch is my favourite author; you are in the hands of a real expert, with the knowledge of a lifetime of research, intellectual integrity and yet at the same time an ability to write with wit and a sense of drama and narrative.

Enough fandom, then, why would you read the book?  Because I'm not going to lie to you, the lad doesn't let you get away with a quick Sunday afternoon after the papers. It's 704 pages, this is a scholarly work with exhaustive detail. MacCulloch lets the answers to the questions about Cranmer emerge from the chronological narrative. While accepting that Cranmer's views change over time, he maps these carefully, and dismisses the view that theological and doctrinal changes are driven by politics. Instead they emerge from the development of Cranmer's thinking and personal convictions. He shows that Cranmer had an acute and endearingly critical sense of his own weaknesses, and judged himself at time harshly. MacCulloch also points also to Cranmer's awareness of how important was his survival to the evangelical cause, and that his commitment to that cause frequently outweighed the temptation to retain a simple theological purity - witness his reaction to the Six Articles.

MacCulloch demonstrates that Cranmer was often (again rather endearingly) politically naive; I found the Prebendaries Plot one of those examples of writing that is at once analytical and insightful, but also dramatic. But he also shows that the image of a soft, moderate Cranmer of the later Anglican historiography seriously underplay's  the sharp edge of Cranmer's beliefs. He shows that Cranmer was a thorough going believer in reformer religion, red in tooth and claw, with a commitment to the international reformed movement. That he was prepared to let very little stand in his way - as the radicalism of his Edwardian demonstrated, and as his pursuit of the Anabaptist Joan Boucher also displayed.

MacCulloch very clearly dispels the whiff of cowardice that hangs around Cranmer's reputation. He shows that on numerous occasions - with Anne Boleyn, Thomas Cromwell, Somerset for example - Cranmer was prepared to speak up where others did not dare, and interprets the letters that survive as prudently diplomatic and persuasive rather than toadying. And he shows that when his nemesis came to the throne, Mary I, he refused the opportunity to leave for the continent, and stayed to provide an inspiration for those that shared his evangelical beliefs.

The final period of Cranmer's famous and extraordinary death is careful and detailed, and shows how the final months of his life bore great similarity to what might be called brainwashing, leading to a brief collapse. And how from the deepest and darkest place of his surrender, he found the strength to reassert his own self.

In summary then - this is a tremendous book, I cannot recommend it highly enough, for all the reasons given. The word of warning again; I remember being told at school, ad nauseam, that you get out of life what you put in, and I have to say at the age of 16 or whatever I had to work hard to restrain the vomit reflex. But it is irritatingly true, and very much true in the case of this book - give it your time and attention, and it will open up to you the world of Thomas Cranmer and the English Reformation.