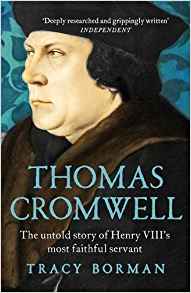 Born a lowly tavern keeper's son, Cromwell rose swiftly through the ranks to become Henry VIII's right-hand man, and one of the most powerful figures in Tudor history. The architect of England's break with the Roman Catholic Church and the dissolution of the monasteries, he oversaw seismic changes in our country's history. Influential in securing Henry's controversial divorce from Catherine of Aragon, many believe he was also the ruthless force behind Anne Boleyn's downfall and subsequent execution. But although for years he has been reviled as a Machiavellian schemer who stopped at nothing in his quest for power, Thomas Cromwell was also a loving husband, father, and guardian; a witty and generous host; and a loyal and devoted servant. With new insights into Cromwell's character, his family life and his close relationships with both Cardinal Wolsey and Henry VIII, joint Chief Curator of Historic Royal Palaces Tracy Borman examines the life, loves, and legacy of the man who changed the shape of England forever. 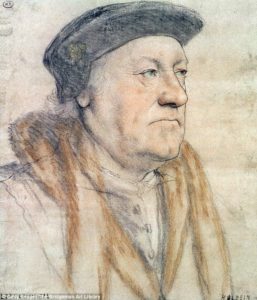 Tracy Borman’s book takes a chronological approach to Cromwell’s life an career, and is well written and flows well and easily; it feels gossipy, personal (as a biography should be) rather than a vehicle for a history of the times, without being trivial. Essentially, it strikes a good balance between the minutiae of Cromwell’s personal life and the great events of the time; where it maybe falls down is the detail of Cromwell’s administrative achievement.It’s aimed more at a general market than as a history textbook.

The book has a subtitle – The Untold Story of Henry VIII’s most Faithful Servant, and actually it does give a clue to the approach.  The untold bit is the focus Borman gives to Cromwell’s private life and his life before he comes into the public eye. I enjoyed the early life stuff in particular; this is one of the things that makes Cromwell such a compelling character. Here is a man who comes to power later in life after a life as a South London thug, a mercenary, commercial fixer for Italy’s greatest banker, and makes himself a career out of nothing as a Lawyer. His background is absolutely unique for the time, even more so than Wolsey’s, and often rather brushed over.

Other personal stuff is good too; I was blown away by John Stow’s story about how Cromwell extended the boundaries of his home by 22 feet in each direction, without even bothering to tell his neighbours, and even put Stow’s house on rollers to move it out of the way. There’s a deal of stuff about Cromwell’s relationship with his son Gregory and Gregory’s tutors – which to be honest was less compelling. But the liberal use of quotes from letters and contemporary material was one of the features of the book, and I thought was excellent.

Borman’s takes an essentially positive view of Cromwell, without sugar coating it. She clearly seems his court intrigue as something which is going to be of interest and spends a deal of time on this, maybe too much probably rather over relying on Chapuys, but hey, its difficult not to. She has Cromwell as the prime mover in the destruction of Anne Boleyn rather than as delivering Henry’s will. But as per her subtitle, she emphasises the loyalty that lay at the heart of Cromwell’s raison d’etre; she ascribes to him a genuine desire for church reform, as a humanist and rationalist rather than as an evangelical in the mould of Cranmer, which makes sense.

I could have done with a bit more analysis of Cromwell’s reputation as a radical reformer of Tudor government.  I don’t mean yet another analysis of Elton’s thesis, but her discussion of the reform of the regions, the relationship between monarchy and England’s gentry, social reform in trade and the Poor Laws of 1536 are perfunctory. This is a real weakness; as she is summing up, Borman makes a bold and interesting statement:

Cromwell’s social reforms had improved the standards of living for many of Henry’s poorest subjects.

But sadly she presented really no evidence to support such a contention, which I think would be very hard indeed to maintain anyway. This rather undermined the authority of the book for me, but for colour, intrigue and  personal life (as far as we can know it) – this is an excellent biography and a thoroughly enjoyable read.

I might note that there is an audiobook available, which I listened to – in fact I seem to have got both for one price which was nice. It’s perfectly well read, except for the most hideous, hideous reading of quotes in the most appalling accents that literally (well figuratively) made me want to break my own kneecaps and feed my liver to my dog on sticks. It is this experience which has for ever banished foreign accents from my own podcast. Jus’ sayin’.