1341 saw a serious political crisis – Edward returned home determined to put his English administration, parliament and particularly Archbishop in their places. In fact it's Edward who is forced to back down and accept a punitive legislative programme to rebuild his partnership with the political community. With a truce in place, Edward was saved from a life of fun and luxury by the start of civil war with a disputed succession to the Duchy of Brittany.

Edward had returned and sacked his ministers, determined to show that his defeat was the result of incompetence on behalf of his ministers, not because it was a losing strategy. His household officials pretty much took the law into their own hands in trying to collect the tax approved in 1340 and getting the clergy to cough up. But the money was still not forthcoming, and a storm of protest, led by the Archbishop of Canterbury, arose at these methods.

In the end Edward had to give way, and call a parliament. He was forced to accept a series of new statutes from the Commons – although a year later in happier times to cancelled all of them. But it was a significant defeat for Edward – but also significant in the way Edward accepted the result, and re-established harmony with his magnates and parliament, not something his predecessor would have been able to do.

The topography of Brittany

Think of Brittany in 2 parts. To the east, fertile country similar to neighbouring Maine and Anjou, easily accessible to the rest of France – Gallo-Brittany. To the west, Breton Brittany; a central rocky and hilly central spine (then heavily forested) and a coastal strip of communities. 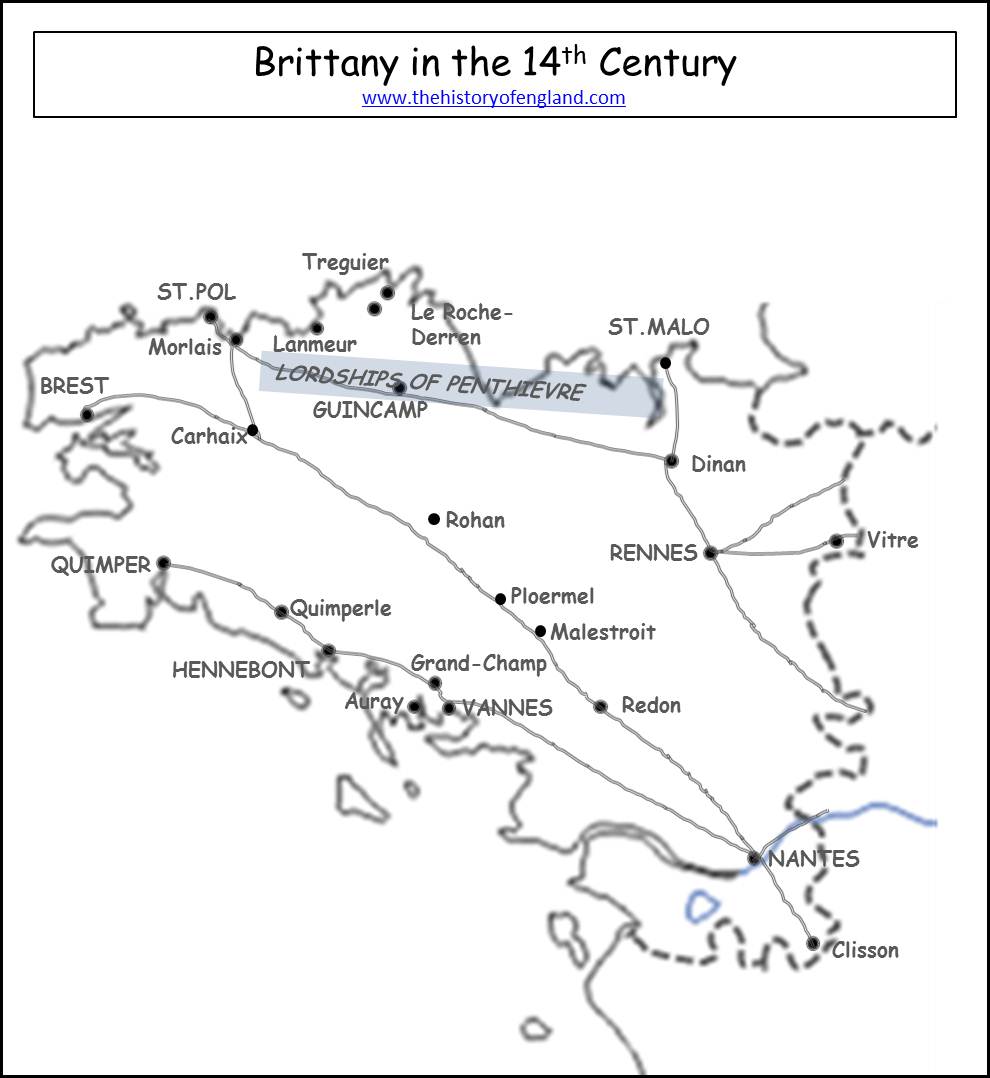 The succession and start of the war

The death of the Duke of Brittany led to a disputed succession:

Almost to a man, with a few exceptions, the Bretons accepted Charles. But John and the Countess of Montfort reacted to the Duke's death quickly, taking possession of key towns and the ducal treasury.

Charles of Bloix soon arrived with a large army and the backing of the French king, and before long had swept most of Brittany clear. Montfort was imprisoned in Paris. Just a few strongholds remained for the Montfort's, including Auray, Brest and the castle of Hennebont, held by the Countess.

William Bohun, Earl of Northampton and the Battle of Morlaix 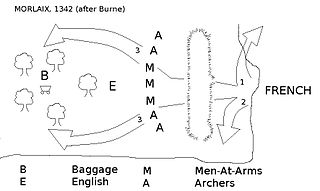 Northampton finally arrived to help with an army of 2,400, split 50/50 men at arms and archers. At first Charles of Blois retreated but as Northampton advanced to besiege Morlaix he returned with an army of maybe 3 times the size. In the ensuing battle, Blois was driven off despite his superior numbers. There's a good description on Wikipedia here.

Morlaix is significant becuase it's the first real battle in the Hundred Years war, and it has many features of later English victories – a defensive well chosen position, dismounted knights/men at arms, the impact of the longbow in the hand of English archers.

The Truce of Malestroit, January 1343

In the autumn of 1342, Edward arrived with an army that took the English presence to 5,000 men. He took over most of western Brittany, but was held up at Vannes. And then meanwhile Jean, Duke of Normandy and the French heir, arrived with a considerably larger army in Nantes.

Edward was vulnerable, with a much smaller army. But incredibly the Duke offered a Truce – and Edward almost snatched his hand off in enthusiasm to accept. The terms were generous – lands in all theatres to be held as they were at the date of the truce, January 1343. It meant that the Montfort claim had survived despite at one stage coming very close to extinction.