By December 1536 there were 50,000 rebels camped around Pontefract Castle while inside their leader Robert Aske composed a petition of 24 articles, to re-instate traditional religion and the Pope. No royal army of any size stood between them and London.

Plus a bonus; Mary Campbell from annagramatica on Queens. 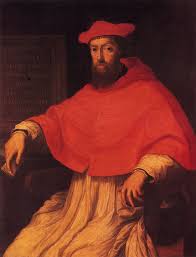 Reginald Pole was the grandson of George Duke of Clarence and destined from birth to be a leading member of the English Church. Generously supported in his youth by Henry VIII he was given the finest education, travelling and living in Italy. But by the 1530’s the relationship had gone sour – Pole could not follow Henry in his break with Rome and theological changes. He was horrified at the execution of More and Fisher, and appalled at the royal supremacy; for Pole, the authority of the Pope would always be superior to that of mere secular rulers.

Despite coming to share Luther’s views on justification by faith, Pole was to become Henry and Cranmer’s implacable enemy. His work ‘Defence of the unity of the church’ viciously attacked Henry for breaking the unity of the church for, as he saw it, no more than his lust for Anne Boleyn. Unable to get his hands on Pole despite attempting assassination, Henry would take dire vengeance on Pole’s family.

In December 1536, Pole was sent by the Pope on a doomed attempt to gain Emperor Charles V’s support for an invasion of England in support of the Pilgrimage of Grace. It would not be the last time that religious conflict threatened to lead to foreign war.

The 24 Articles were produced in Pontefract Castle by Robert Aske in consultation with his ‘pilgrims’, and in all likelihood Lord Darcy. It is a coherent programme that pulls together the desire of the traditionalists to put back the clock to where it had been. Scattered throughout are some political demands (the re-instatement of Princess Mary for example) and some economic concerns – in particular the gentry’s objection to the Statute of Uses, which closed a loophole allowing transfer of land without payment of a feudal due to the king.