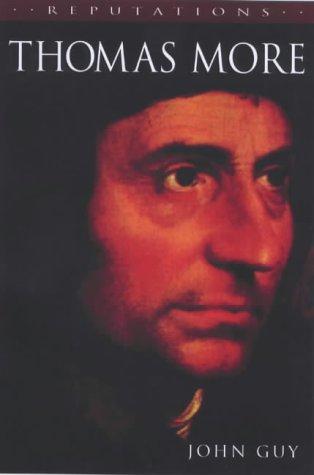 In opening the impeachment trial of President Clinton on 14 January 1999, Congressman Hyde reminded his listeners that `Sir Thomas More, the most brilliant lawyer of his generation, a scholar with an international reputation, the centre of a warm and affectionate family life which he cherished, went to his death rather than take an oath in vain.' His allusion was scarcely lost even on a global audience. With the exceptions only of Henry VIII, Elizabeth I and William Shakespeare, More is the most celebrated figure of the Tudor era. Yet different `Mores' would have been recognized: the humanist wit, the brilliant lawyer, the Utopian reformer, the idyllic family man, the champion of conscience, the scourge of heretics, the icon of liberal-ecumenical Catholicism, the Marxist hero, the protagonist of Robert Bolt's A Man for All Seasons. His fascination lies in exactly this: his posthumous reputation.

Reconsidering key issues in More's life, this new study not only allows us to see with clarity the different portrayals that have arisen to explain or condemn or exculpate, it also breaks fresh ground in its use of new evidence to reconstitute More's beliefs on Henry VIII and the royal supremacy, on the power of Parliament, on the power of the papacy and of the General Council of the Roman Catholic Church. To the question `For what did More so silently die?' we now have a better informed, if no less controversial, answer.

But who was the historical More? Which of the many characterisations that have attached to his name, some plainly incompatible, are upheld by the sources? in this brilliant new study we are, taken behind the facade, to understand better the substructure of evidence on which biographers must construct their works. We see with clarity not only the different portrayals that have arisen to explain or condem or exculpate, but are also given a sense of what we can and cannot know about Thomas More, laying bare those points of transition between the sustainable and the conjectural.

I loved this book. I found it very insightful; it gave a challenging but fair viewpoint, it was beautifully explained and argued. It was relatively short and uncomplicated. It gave a wide range of different viewpoints, along with More’s historiography.

If you are looking for a narrative of the man’s life this is probably not the one for you; but having said that, I thought the structure rather clever. It’s thematic, organised around questions about his reputation – was he really such a reluctant courtier, did he really hunt heretics, he he actually die for the liberty of an individual’s conscience? But in the main, as he goes through each one, he’s able to make it chronological as well, so it works both ways to an extent.

The big thing for me was that Guy in no way came across as being revisionist; he clearly admired the man for his exceptional talents. But I don’t believe in saints, and by the end I understood why we should admire Thomas More enormously, but accept that he’s far more interesting than the absurdly unbelievably perfect character portrayed in A Man for All Seasons. More had his failings; he was guilty of treating heretics as being unworthy of the same rights of silence he demanded for himself; he was a failure as a politician, a path he chose; he manipulated his reputation shamelessly. But I should point out that in all of these aspects, More was a man of his time. More never considered himself a saint, and I imagine would have considered his beatification a little daft. He and his contemporaries saw manipulating your reputation as a duty, not as dishonest. And in the context of the medieval view of Christendom, More was entirely justified in pursuing heretics.

Sadly, if you want to read the book, I think it’s out of print – but Abebooks have plenty. It was without a doubt the best book on Thomas More I read.