The Tudor dynasty of England (1485-1603 AD) produced one of the most famous monarchs in human history: Elizabeth I. Reigning over the Golden Age of England for 45 years, Elizabeth is widely researched and scrutinized, a feminist beacon of hope even 500 years after her death. And yet, as the daughter of Anne Boleyn, the “second wife” who lost her head, Elizabeth was never meant to matter to the annals of history past who she married and what children she bore. Because of this dismissal, her intimate relationships with other women, particularly before her rise to the throne, are largely lost to the past.

That doesn’t mean these bonds were non-existent, however. Elizabeth was close with a few women in her life, including her governess Kat Ashely, her famous older sister Mary, and even her last stepmother, Katharine Parr. But the connection most overlooked is Elizabeth’s relationship with Anne of Cleves, the wealthiest landowner in all of England for a time.

Anne was born in Dusseldorf in 1515, a prominent member of the nobility in the Duchy of Cleves. In 1539, after renowned artist Hans Holbein created a portrait of Anne that pleased the king of England, the then 24-year-old was sent to fulfill her marital contract and provide a male spare for Henry VIII’s heir, Edward (son of Jane Seymour, who tragically died from childbirth related causes).

The marriage was definitively not a love match and inevitably crumbled. After 6 months of wedded non-bliss, Henry annulled the unconsummated pairing. What was viewed as the end of Anne’s life in England actually triggered her rebirth. Henry, grateful for Anne’s compliance in the dissolution of their marriage, granted her an income of 20,000 pounds a year, along with the official title of the King’s Beloved Sister.

Dr. Tracy Borman, renowned historian, and joint Chief Curator for the Historical Royal Palaces explained this title firmly ensured Anne’s place as “the third lady of the kingdom,” behind the new, short-lived, queen Katherine Howard and the Princess Mary. But her true prize was the continuation of her relationship with the then child Elizabeth.

Motherless and removed from the line of succession, Elizabeth first met Anne upon her arrival in England. Meeting at the Bishop’s Palace in December of 1539, the two quickly struck up an indelible bond that would last the rest of their lives.

“We know the two women were very fond of each other…they just bonded,” said Dr. Borman, “their relationship really blossomed after the marriage [with Henry ended].”

Anne’s acquiescence to annul the marriage secured her presence in Henry’s good graces, engendering the generosity of the famously capricious king and receiving many palaces and estates as the king’s new ‘beloved sister’. Free from marriages or other constraints, Anne was able to buoy her new status to maintain a relationship with the young Elizabeth, even going so far as to have the child visit her at her home, Hever Castle.

“There must have been associations for Elizabeth,” Dr. Borman theorized, “and an extra reason to want to visit Anne at Hever.”

Hever Castle was the home of the Boleyn family since 1462. Anne Boleyn spent the first 11 years of her childhood in the castle and utilized the home as a refuge from court politics upon her ascension to Queen of England. Elizabeth, long told of her mother’s wickedness and treachery, maintained a locket with her likeness beside her bed until her death in 1603, suggesting the bond between mother and child rose above court gossip.

Whether consciously aware of the castle’s importance or not, Elizabeth may even have viewed Anne of Cleves as a quasi-maternal figure. A single woman of great wealth and enormously respected throughout the kingdom, Anne passed on many traits historians have come to recognize in Elizabeth’s reign.

“I think Elizabeth would have been inspired by Anne’s example…as an unmarried woman, making her way in society and very successfully,” posits Dr. Borman, “Single women [in Tudor society] were compared to apes in hell…dragged along by the devils.”

This negative association would have permeated into the lives of the two women. And yet, both remained unmarried until their respective deaths, with Elizabeth famously labeled The Virgin Queen.

Is there a connection? Dr. Borman believes so, saying,

“For Elizabeth to want to be an unmarried woman herself, she must have drawn on examples around her, and Anne of Cleves was probably the best example she could get.”

And this makes sense. Elizabeth’s mother was unjustly murdered by her father after just a few years of marriage, and she silently observed four more wives come and go before her father finally died. Her sister Mary was besotted with her husband, Phillip II of Spain, a man who made no effort to hide his inability to return this affection, even going so far as to propose marriage to Elizabeth not long after Mary’s death.

Most glaringly, and heartbreakingly, was what appears to be the profound impact the marriage of Katharine Parr and her husband, Thomas Seymour, imparted on Elizabeth. Parr, the other parental figure in Elizabeth’s life, had the young princess live within her household upon Henry VIII’s death in 1547. Kat Ashley, Elizabeth’s long-time governess, testified in a 1549 deposition that Parr’s husband, Thomas Seymour, would rise early and enter Elizabeth’s bedchamber and proceed to inappropriately touch the child. There are no existing accounts that document Elizabeth’s perspective regarding this event, but it can be reasonably assumed that Elizabeth could have been traumatized, her love for Katharine Parr permanently connected with the behaviour of her husband.

The impact of this on Elizabeth, from the hands of a husband in a seemingly loving marriage, cannot be definitively proven, but could be perceived as a life-altering childhood trauma. After Parr’s death in 1548, Elizabeth witnessed Anne’s happiness, contentment, and safety as a single woman running her own household. While additional reasons certainly impacted the future monarch’s rejection of marriage, Anne’s lifestyle may have served as a ray of light and hope during a time when, “[unmarried women] were seen in this really, bizarrely, negative, and sinister light,” according to Dr. Borman.

Anne was also endowed with a natural poise and social acuteness that Elizabeth most definitely emulated. As a foreigner representing her nation, Anne actively observed her courtiers, learning how to present herself as the ideal English woman and Queen, as she had “a different upbringing to an English lady.” The fourth Queen in a short period, Anne was determined to learn.

“[Anne] was a pragmatist,” says Dr. Borman, “she learned from her predecessors.”

It is this pragmatism, in conjunction with her kind and cunning nature, that ultimately wins the affection of Anne’s contemporaries, Elizabeth among them. “[Anne] made sure to be friends with everyone, and I think that was quite a pragmatic thing to do in the Tudor Court.”

And Anne led by example, demonstrating her pragmatism to Elizabeth, “particularly during Mary’s reign, when [Anne and Elizabeth] had this kind of, solidarity over religion.” Protestants during a Catholic resurgence in England, both Anne and Elizabeth, “really come into their own,” says Dr. Borman, “they’re seen together in the same carriage at Mary’s coronation…there’s this feeling of solidarity during a difficult reign for them.” 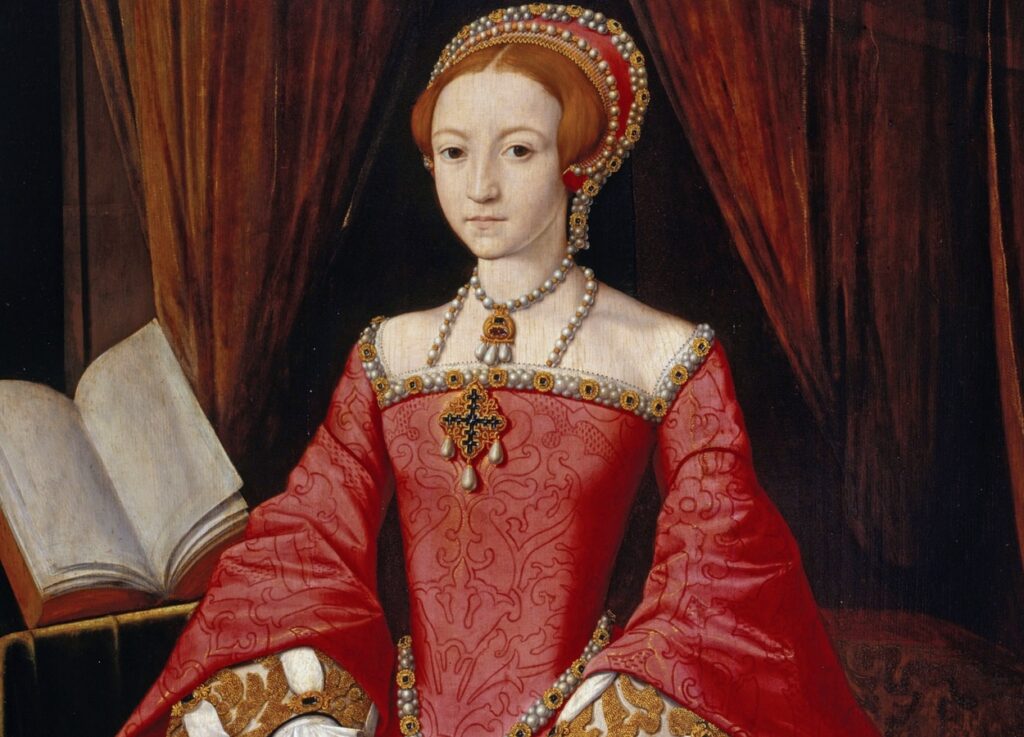 ne and Elizabeth related as two women with no steady anchor to society, no secure family unit to serve as a safety net, and no commitment or connection to the newly prevalent Catholic religion within England. Anne was divorced, indelibly marked by the rejection of the king, and stranded in a foreign nation, dependent upon Henry and his successors for her livelihood. Elizabeth was the disenfranchised child of a traitorous mother, forever stained with the sins of her family’s past.

Their unavoidable solitude in a turbulent time brought Elizabeth and Anne together, creating a most fascinating friendship of the age. Which is why the relationship’s lack of historical prominence is surprising. Perhaps the relative silence regarding the pair is due to a lack of physical evidence connecting them, such as letters or other correspondence. To that extent, history must continue to guess and conjecture about their feelings and perspectives regarding one another. But that lack of proof has never prevented historians theorizing connections in other circumstances. Dr. Borman succinctly summarizes this historian’s feelings, saying,

“[Women in history] have got to be temptresses or…schemers. You know…they can’t just be an able woman who has power, there’s got to be some kind of sinister thing behind [their actions].”

Anne was too widely accepted as the docile wife to earn that sinister brand, and Elizabeth rocked the foundations of Europe with her resounding success in power. The relationship between two bonded, complex women that rejected the pre-determined mold was seemingly easier to ignore and forget than provide historical significance.

After all, “Anne had her independence” as the wealthiest landowner during the reign of Henry VIII while “Elizabeth made England fall in love with queens.” If these two figures were men, their relationship would have undergone thorough study. Hopefully, as historians continue to widen their lenses and investigate the sidelined members of history, Anne and Elizabeth’s friendship will receive the limelight it so rightfully deserves.

Leah’s mission is to give all overlooked and/or misrepresented women in history the respect they deserve. You can find out more about Leah and her work at https://leahgarden.com.

She also has an article about the life of Margaret Beaufort being published in New Lines Magazine https://newlinesmag.com/ with quotes from an exclusive interview with historian Dr. Elizabeth Norton