Skip to content
You are here
Home > Resource > Chaucer, the English and the Sea

The sea is embedded in English identity. Afterall, the ocean makes up over 90% of England’s borders, it has long dictated external political and military policy, and defined mercantile activity.  Throughout the middle ages, the sea enabled England’s engagement in everything from international politics to the exchange of ideas, from commercial fishing and the wool trade that made her rich. Englishmen crossed the oceans as merchants, mercenaries, fishermen, warriors, and diplomats to foreign ports and courts, while in turn continental traders and dignitaries were frequent visitors to busy southern cities such as London and Canterbury. So it should be of little surprise that the sea would have a presence in the conversations of, say, thirty pilgrims making their way London to Canterbury. Likewise, it is unsurprising that Geoffrey Chaucer, that adept observer of fourteenth-century English culture, should provide some commentary on the role of the sea in English life within The Canterbury Tales. 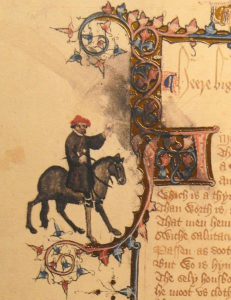 If you are familiar with The Tales, I anticipate you will immediately think of one of the pilgrims: the Shipman. If you are not familiar with Chaucer’s opus, it is perhaps best characterised as a collection of stories, loosely held together by a framing narrative in which a group of pilgrims travelling from London to Canterbury engage in a story-telling competition. The Shipman is one of these pilgrims, not a character of one of the tales. For our purposes here, the tale he tells is of less interest than the storyteller, and what his character can tell us of a fourteenth-century English man of the sea. The Shipman gives little away in the opening passages of The Tales to give us insight into his status, but later he is referred to as a ‘ship’s master’ and ‘mariner.’ While the term ‘shipman’ itself is a little generic, the ship’s master resides in the upper echelons of the seaboard community. Though unlikely to have owned his own ship or been a direct investor, we can expect our Shipman, as a ship’s master, held direct financial control over the trading ventures while at sea and in foreign ports (unless one of the owners travelled with the expedition).

A ship’s master held broad authority to make independent decisions regarding the venture, providing the necessary flexibility to cope with the unforeseen that so often occurs during seafaring. Thus, a good master was well in demand. But our Shipman may have been more of the middling sort. He rides a cart-horse, he wears plain simple clothes, he carries a dagger. That both his cloak and weapon are almost certainly imported speaks to the mariner’s peripatetic life, but nothing in his kit demonstrates any great wealth (though he has sufficient funds to undertake his pilgrimage). Let’s leave him there for a moment though.  The Shipman is not alone in The Tales in providing insight into English maritime culture and practices. We will also be taking a look at Man of Law’s Tale, a narrative that provides some insight on how the English perceived themselves in relation to both the ocean, and their place in the wider world.

The medieval geography of the sea

The tale has a number of notable features and tropes, but the geographical breadth of Constance’s travels is particularly remarkable. Now, we should not suppose that Chaucer sat with a map of the Mediterranean before him as he wrote the Man of Law’s Tale. The geography and topography of the tale are deliberately obscure, and Chaucer’s intent is to ascribe the very randomness of Constance’s drifting at sea to the demonstration God’s guiding hand. Yet, setting aside the implausibility of Constance surviving these journeys alone and ill-equipped, such travels by sea were fundamentally plausible. Moreover, Chaucer shows a familiarity with sea-charts and mappae mari or at least the tradition that informed them, referencing both the Sea of Greece and the Strait of Morocco in Constance’s journey to Northumbria, and Gibraltar and Ceuta in her return journey.

Sea-charts may need a little explaining, as our perception of medieval maps is often limited to the famous but stylised mappae mundi – many of which were contemporary with Chaucer’s time. The mappae mundi were attempts to depict the entire world, as perceived by the medieval understanding of geography, and in so doing sought to represent the scale of the known lands, but not their representation in space. In contrast, sea charts were more localised and intended to depict coastlines in such a manner to help mariners navigate between ports. It is this tradition Chaucer accesses, and he is clearly aware that such navigation is largely coastal – fourteenth-century English mariners were not bravely pointing their bows to the open ocean. We see this demonstrated in the Shipman’s boast that he: ‘knew all the havens, as they were, from Gotland to the cape of Finisterre, and every creek in Britain and in Spain.’ It is apparent that the Shipman was used to navigating the European coasts, believing he knew every safe place and port for his ship throughout Britain and from Denmark to Spain.

So where did Chaucer gain such insights into maritime practices? Firstly, Chaucer travelled. Certainly as a soldier to France in his youth, likely as an ambassador to Italy, and possibly as a pilgrim to Spain. As such, Chaucer had personal experience of the mariner’s trade. But more than this, Chaucer’s life outside his works demonstrates that ubiquity of the sea to England. Chaucer was transported across the Chanel as a soldier pursuing the crown’s martial endeavours, then he was sent through the Strait of Gibraltar as a diplomat to pursue the crown’s political aims, then he embarked on a voyage to Spain as a private citizen for the benefit of his soul. Secondly, Chaucer’s position as comptroller of the customs port in London required regular interaction with seafarers. Chaucer’s Shipman is precisely so interesting to modern readers because he is so well observed, built upon the poet’s own experience with the maritime traders. Thirdly, Chaucer seems to have had access to both sea charts and travel literature – a result of both his roles as comptroller and patronised author. The Mediterranean and the pilgrimage routes from London to places like Rome are well attested in both sea charts and travel literature, being some of the most regularly traverse sea-routes. There is little reason to doubt Chaucer drew on this tradition in including the geographical references we noted in the accounts Constance’s journeys.

Part of the English canvas

We shouldn’t understand Chaucer’s experiences with the sea as unique (though the extent of his travels may well have been so). Many other young Englishmen travelled to the continent as soldiers in the fourteenth-century. The English crown had many diplomats of various standings to send to continental European courts and cities. While those with the means often engaged in pilgrimage to Rome or Santiago de Compostela or other such destinations. And this does not take into account the more everyday interactions with the sea represented by trading and fishing. The sea connected England to Europe on many levels. For this reason, the sea is undeniably present in the culture of fourteenth-century England as represented in The Tales, and we are fortunate to have in Chaucer an observer with some familiarity with maritime culture and practices. Yet, as a closing note to this rather brief sketch of the sea in The Tales, I want to highlight how prosaic the depictions of the sea and travels upon it are, both in the Shipman’s prologue and the Man of Law’s Tale. The sea is almost something of an unremarkable background character, merely a conveyance facilitating the actions of a character or events at a destination. It speaks to the sheer ubiquity of the sea to fourteenth-century English culture, to the people of an island at the edge of European civilisation.

Britain and the Sea Members Podcasts

The sea is wound into England’s history, so if you are a listener to the podcast you’ll here plenty. But there’s never as much space as there should be, so if you are an enthusiast Membership includes an occasional series of podcasts on Britain and the sea, when we want to do more; the laws of the sea for example, or the piratical career of Eustace the Monk, the pirates (ahem) I mean- seafarers of Devon and Cornwall – that sort of thing. If you are interested follow the link to Britain and the Sea. If you are not a member – then Become a Member now!

Alfred Hiatt, ‘“From Hulle to Cartage”: Maps, England, and the Sea,’ in The Sea and Englishness in the Middle Ages, edited by Sebastian I. Sobecki, pp. 133-58

Matt is a PhD candidate at the Flinders University of South Australia, whose research focuses on the literary transmission of Anglo-Saxon kingship through the middle ages. Matt is also a researcher and writer at The Postgrad Chronicles medieval history blog, you can follow the page on Facebook.

2 thoughts on “Chaucer, the English and the Sea”