Skip to content
You are here
Home > Resource > Thomas Cromwell: A Life by Diarmaid MacCulloch 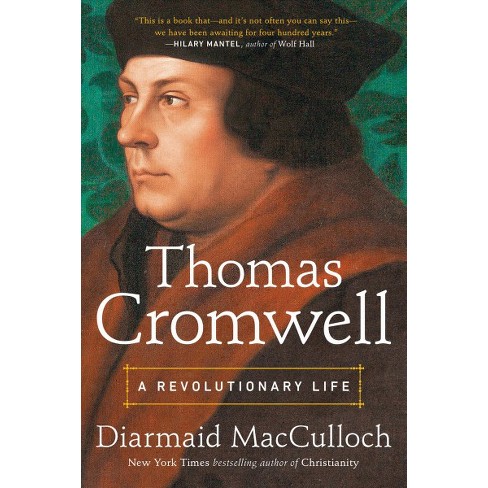 Thomas Cromwell is one of the most famous - or notorious - figures in English history. Born in obscurity in Putney, he became a fixer for Cardinal Wolsey in the 1520s. After Wolsey's fall, Henry VIII promoted him to a series of ever greater offices, and by the end of the 1530s he was effectively running the country for the King. That decade was one of the most momentous in English history: it saw a religious break with the Pope, unprecedented use of parliament, the dissolution of all monasteries. Cromwell was central to all this, but establishing his role with precision, at a distance of nearly five centuries and after the destruction of many of his papers at his own fall, has been notoriously difficult.

Diarmaid MacCulloch's biography is much the most complete and persuasive life ever written of this elusive figure, a masterclass in historical detective work, making connections not previously seen. It overturns many received interpretations, for example that Cromwell was a cynical, 'secular' politician without deep-felt religious commitment, or that he and Anne Boleyn were allies because of their common religious sympathies - in fact he destroyed her. It introduces the many different personalities of these foundational years, all conscious of the 'terrifyingly unpredictable' Henry VIII. MacCulloch allows readers to feel that they are immersed in all this, that it is going on around them.

For a time, the self-made 'ruffian' (as he described himself) - ruthless, adept in the exercise of power, quietly determined in religious revolution - was master of events. MacCulloch's biography for the first time reveals his true place in the making of modern England and Ireland, for good and ill.

A man proud of his background, a constant and loyal friend – Cromwell was so much more than the King’s enforcer

A reputation that is surely at last rightfully rescued

Thomas Cromwell has provoked vastly different opinions every since he died – generally dividing along confessional lines. I had the joy of talking to the good professor, and MacCulloch noted that it was in the Victorian era that the idea of ‘Good Cromwell’ was definitively lost, in a welter of outrage at the ruined monasteries across the countryside, newly visited by the English tourist. Until Hilary Mantel’s Wolf Hall turned everything upside down and helped the world rediscover the talent and humanity of the man.

In this book, MacCulloch specifically references Mantel, and clearly loves her novel – but makes the point very clearly that Wolf Hall is a novel, and this book is strictly history. It’s a big old book, and as I turned the first page I have two expectations – I was going to be bored, and surely there could be nothing new in such well trodden country. I was really wrong.

MacCulloch is a master historian and an engaging writer

The thing is that MacCulloch is a great writer. Flashes of irony liven the page, and he delights is turning onto the side streets from time to time – you’ll learn how to pronounce ‘Crummel’, and St Leger for example. Above all he is a master historian, in all respects – in how to dig for new material, how to understand that material, and how to analyse and interpret the evidence. There is a continual stream of all of these. We discover a cascade of fascinating small thing, such as that the old stories of Cromwell’s violent and crooked father are largely myth.  But there are big moments of re-interpretation that hit you with the force of revelation. For example, since they shared the same religious beliefs, its usually assumed that Cromwell and Anne Boleyn were allies; MacCulloch shows that they hated each other, and it explains so much.

Proud of his background, loyal and generous of spirit

MacCulloch shows Cromwell as an emotional and loyal man. He shows how utterly central was his devotion and gratitude to his old master, Thomas Wolsey, and how Cromwell displayed his loyalty for the world to see through the coat of arms he employed. He shows how proud Cromwell was of his background, and how in a world dominated by hierarchy and nobility he flaunted his low birth, and stayed loyal to his old connections throughout his life.

He also shows how hard he could work for others. There was his son Gregory of course – to whom Cromwell was a devoted father. But you might expect that; more revealing is how Cromwell did his best for the mass of supplicant who wrote to the great man for his support, and for whom Cromwell did the best he could. He shows the strength of his relationship with the Princess Mary, transcending religious differences.

Above all, MacCulloch shows us a Cromwell motivated by deeply held religious beliefs, nothing like the dull, cynical bureaucrat of recent legend. He shows how his evangelical views formed – haltingly but by the mid 1530’s, completely, despite his respect for Wolsely, and shows how it shaped Cromwell’s actions in government. MacCulloch’s love and respect for his old doctoral supervisor, Geoffrey Elton, runs through the book, but he dispatches the idea of a structured, strategic revolution in government in favour of a talented political operator – while pointing out the significant impact Cromwell had in the structure of regional government.

If there is a criticism of the book, in his enthusiasm for revealing the greatness of his subject, his brutality gets a little underplayed – it’s in there; for example, MacCulloch points the finger squarely at Cromwell for Thomas More’s conviction, and shows how even Cromwell and his household are embarrassed at the memory. But the brutality it is not a focus of the book; the murdered Carthusians are covered, but MacCulloch takes pains to show that Cromwell tried to mitigate their treatment. There’s no doubt Cromwell did what was required to deliver his master’s wishes, and goes beyond the ‘just following orders’ defence. But then if you want hysterical condemnations of Cromwell’s methods you can find them in about a billion other books and articles.

I am confident this will be the definitive  biography for many years to come – there is nothing even approaching its quality currently in print. The best anecdote for me, which came out in the interview I had with him (which you can find on the podcast episode ‘Diarmaid MacCulloch talks Cromwell’), are the Holbein paintings of Thomas More and Thomas Cromwell. Thomas More’s has a number of changes made; More, the consummate humanist, believed deeply in controlling his reputation, and had many changes made to his portrait before he was satisfied it showed him as sufficiently thoughtful and noble. In this More far outdid Cromwell in his cold, calculating manipulation. Cromwell’s portrait on the other hand shows a practical, bull-like man, on the edge of losing his temper. MacCulloch notes that Cromwell cannot have been unaware of how Holbein had presented him – nonetheless he displayed the painting in his house – and he asked Holbein for not a single change. There I am, he said,  take it or leave it.

5 thoughts on “Thomas Cromwell: A Life by Diarmaid MacCulloch”