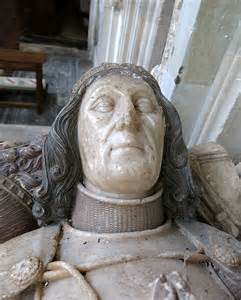 harsher than the modern historian. At the time, William was hounded from office by Richard of York and the Commons in Parliament, impeached so that Henry VI was forced to exile him. The contemporary saw a parvenu, tyrant, incompetent who betrayed his country by giving up Maine to the French.

The modern historian sees a loyal, conscientious, hard working man who did his very best to manage the country while dealing with an incompetent king and a headstrong and imperious Queen. In the end it was too much for him, and his head ended up on the beaches of Kent.

Before he left on exile, exile that would lead to his death and beheading on the ship before he cleared England he sat down and wrote a letter to his boy, John, just 8 years old and presumably still with his mother Alice Chaucer. The letter survives, and it helps bring a medieval character to life.

My dear and only well-beloved son, I beseech our Lord in Heaven, the Maker of all the World, to bless you, and to send you ever grace to love him, and to dread him, to the which, as far as a father may charge his child, I both charge you, and pray you to set all your spirits and wits to do, and to know his holy laws and commandments, by the which you shall, with his great mercy, pass all the great tempests and troubles of this wretched world.

And that also,  knowingly, you do nothing for love nor dread of any earthly creature that should displease him. And there as any frailty maketh you to fall, beseech his mercy soon to call you to him again with repentance, satisfaction, and contrition of your heart, never more in will to offend him.

Secondly, next him above all earthly things, to be true liegeman in heart, in will, in thought, in deed, unto the king our aldermost high and dread sovereign lord, to whom both you and I be so much bound to; charging you as father can and may, rather to die than to be the contrary, or to know anything that were against the welfare or prosperity of his most royal person, but that as far as your body and life may stretch you live and die to defend it, and to let his highness have knowledge thereof in all the haste you can.

Thirdly, in the same way, I charge you, my dear son, always as you be bounden by the commandment of God to do, to love, to worship, your lady and mother; and also that you obey always her commandments, and to believe her counsels and advices in all your works, the which dread not but shall be best and truest to you. And if any other body would steer you to the contrary, to flee the counsel in any wise, for you shall find it naught and evil.

Furthermore, as far as father may and can, I charge you in any wise to flee the company and counsel of proud men, of covetous men, and of flattering men, the more especially and mightily to withstand them, and not to draw nor to meddle with them, with all your might and power; and to draw to you and to your company good and virtuous men, and such as be of good conversation, and of truth, and by them shall you never be deceived nor repent you of.

Moreover, never follow your own wit in nowise, but in all your works, of such folks as I write of above, ask your advice and counsel, and doing thus, with the mercy of God, you shall do right well, and live in right much worship, and great heart’s rest and ease.

And I will be to you as good lord and father as my heart can think.

And last of all, as heartily and as lovingly as ever father blessed his child in earth, I give you the blessing of Our Lord and of me, which of his infinite mercy increase you in all virtue and good living; and that your blood may by his grace from kindred to kindred multiply in this earth to his service, in such wise as after the departing from this wretched world here, you and they may glorify him eternally amongst his angels in heaven.

Written of mine hand,

The day of my departing from this land.

Your true and loving father

One thought on “Letter of William de la Pole”