Here is a quick fly-by of some of the words and events that went to make up the favourite social pastime of the medieval knight and lady – the tournament. There’s also a podcast episode for members available from 18th June.

a l’outrance (jousts of war), a plaisance (jousts for fun): sometimes combat fought under war conditions, using normal, and sharpened, weapons of war and normal armour. They were usually prompted by personal or national enmity. A good example is the combat of the thirty in Brittany in 1351. Much more standard was combat fought mainly for entertainment using specially modified, blunt weapons. Modified armour was increasingly used, specially adapted  for the tournament.

Court of Honour: The tournament might be presided over by a Knight Marshal, with a group of judges and scorers who are in charge of judging the chivalry and horsemanship of all participants. Rules are a bit obscure, but here are some rules laid down by John Tiptoft in 1466.

Scoring rules of the Joust

Lists and layout: The lists were the designated area for combat. For the old tournament/melee this could extend over many miles, which sounds like a lot of fun. It became associated for the joust, and then they became the long narrow stretch of ground down which the combatants ran their courses. The ‘Tiltyard’ becomes synonymous with the lists in England, where the ’tilt’ is the joust or the barrier separating the two combatants. As a barrier it could be a solid fence covered with painted hangings, a wooden rail, a length of fabric or even a simple rope. The ‘Counter Tilt’ was another barrier, that defined the outside edge of the lane. Spectators might lean on the counter tilt and watch the show. Then for the high-born you would have the grandstand, or berfrois. In towns, tournaments would take part in the marketplace.

Pageant: By the late 15th and 16th centuries, the pageant could be just as important as the fighting, or more so. But as early as Edward III there were elaborate processions, one including a procession of knights tied to their ladies by silver chains. The tournaments of Henry VII involved elaborate mechanical devices such as the ‘rich mount’ (a play on Richmond, his earldom), and his daughter Princess Mary as the Lady of May starting the tournament off.  Knights might joust in costume – such as Thomas Grey jousting as a monk. Tournaments were a spectacle – of plays and pageants, of brightly-coloured heraldic devices, of the latest clothes and fashions. Tournaments could go on for days, with a feast and dancing following every day’s fighting.

Practice: There were a number of ways that knights might practice, and some of these carried over into the tournament – as non-violent competitions. One was the Quintain. Here, a target was attached to a pole which was used in lance practice. An ill-placed blow would cause the arm of the quintain to swing round and hit the horseman. Another was ‘running at the ring’. This involved riding with lance and aiming to catch a small wooden ring on the end of your lance. It took great skills – Henry VIII was something of a dab hand at it.

Spectators: spectators of the ordinary sort might crowd around the edge of the lists; but for the high born and the ladies, a temporary wooden grandstand was built, called a berfrois or escafaut. Women got involved in other ways; sometimes they became the ‘Lady of Honour’, judging the winners. In some tournaments, they had the ability to give extra points to those competitors who show higher levels of equestrian ability and/or chivalry. Often women presented the prizes, and were part of the story or pageant. For example, Princess Mary, Henry VIII’s sister was Lady of May for her father’s tournaments. 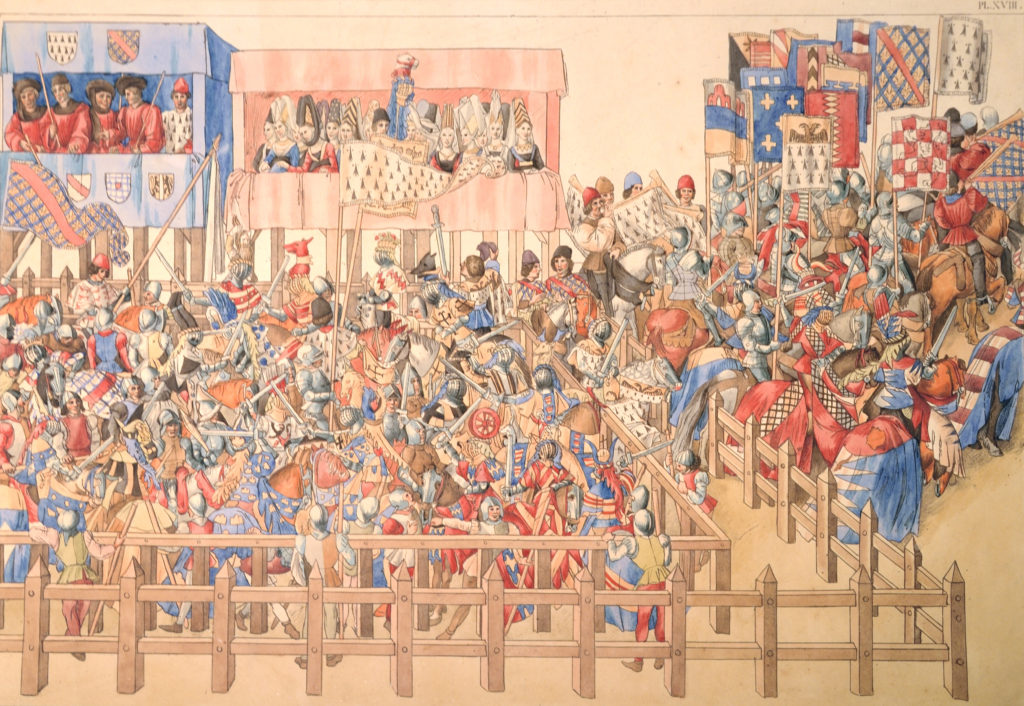 Tournament types: Actually a more common word for the tournament was the ‘hastilude’, which literally meant a game with spears.

Weapons: The lance is the weapon we most associate with tournaments. The lance itself could vary quite a lot – they could vary in weight, and therefore be designed to break very easily, or be much heavier and harder to break – and of course points were won by breaking spears. One knight was upbraided for damaging his king, by using a lance that was too heavy.  I know fishermen who spend more time talking about their kit than actually fishing – tourneyers were apparently the same, according to John Bromyard, a cleric who despised the whole business, and thought them all a bunch of show-offs:

“Who has been heard to praise [the tourneyers] for the strenuous battling …for their defence of country and church…but rather…that they have a helmet of gold…that so and so carried into the lists a huge square lance such as no-one else carried or could carry, or that he flung horse and rider to the ground;…or again that so and so came to parliament or to the tournament with so many horse”.

But jousts could be fought with a number of different weapons as well as the lance. The axe was normally a long handled weapon using both hands; the sword and the dagger were also used.

Wearing armour and heraldic devices: In the early days, folks just wore the armour they’d always use. Then someone invented the Great Helm – which entirely covered the head and sat on the shoulders and therefore also protected the neck. This would have an impact on heraldry – since now you needed to identify yourself. Armour then began to get more sophisticated, and began to be specialised for tournaments; the ‘arret’, a hook which which to balance your lance when running a course; specialised saddles for standing up in the stirrups; or the frog faced helmet, which both protected your face, and force you to lift your head at exactly the right moment in the joust. Knights would wear increasingly elaborate crests on their helmets to show who they were, and horses began to wear ‘caparisons’, brightly coloured cloth all over the horse bearing the knight’s heraldic colours and device.