When he came to the throne as a teenager, Henry VIII chose the traditional view of monarchy, a very medieval view of the role of the king and despite his education in the New Learning, he was also steeped in the chivalric romance. In February 1511 Catherine of Aragon delivered a son, immediately christened Henry. After the stress of her recent miscarriage, everyone went potty with delight, and Henry reacted in the most natural way – he gave thanks at the shrine at Walsingham, and announced a tournament. Piety and partying, essentially.

By the 16th century, Tournaments had changed from their origins as a melee to practice the art of war, to a highly ritualised and elaborate party. The tournament was to be held at Westminster, and Henry kicked things off by issuing a challenge. This was a typical way to announce and structure your tournament; wrapping the event around a chivalric story, issuing a challenge or a vow, dividing the event into Challengers and Answerers.

Henry’s challenge was issued on 12 February and signed by the King. It listed the rules of the tournament, and laid out the story. Queen ‘Noble Renown’ of the kingdom of ‘Noble Heart’, rejoicing at the birth of the prince, had sent four knights, Ceure Loyall, Vailliaunt Desyre, Bone Voloyr and Joyous Panser, to joust in England against all comers.The names of these knights came from the greatest love allegory of the Middle Ages, the Roman de la Rose, and they personify the psychological forces in the conquest of love. This was a play effectively; the parts of the knights were taken by Henry and three of his leading courtiers, Sir Thomas Knyvet, Lord William Courtenay and Sir Edward Neville. Once the challenge was out there, other courtiers rushed to sign up to answer the challenge.

Henry VIII wanted a pictorial record of his tournament so he commissioned a Roll of Honour which survives. It is a pictorial illuminated manuscript, a continuous roll approximately 60 feet long. It is a narrative of the beginning, middle and end of the tournament.

The tournament took place over two days, and was accompanied by feasting and dancing. At the start of the tournament was a procession through the streets of London and Westminster so everyone could show themselves off in their finery; no doubt the Londoners gaped and cheered as they went past in all their glory. The king is in the centre of course, surrounded by a host of footmen, officials and dignitaries, a mace bearer, a crowd of nobles, the officers of arms and six trumpeters.

The procession with Henry at its heart 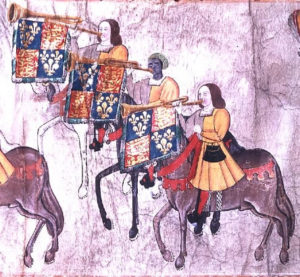 One of the trumpeter’s is a black musician called John Blanke, from the Latin word for white. He’s the only identifiable black person in 16th century English art. He probably came to England with Catherine of Aragon’s entourage, and so had been a musician at the English court since around 1507; he may have come from Spain, Italy or Portugal, all of which had growing black populations. We hear a little of him; pitching for a better job to Henry, and marrying in 1512. Henry was clearly  a fan, giving him a gown of violet cloth, and also a bonnet and a hat, ‘to be taken of our gift against his marriage’.

The Pageant and Joust

The tournament followed the best traditions of the high point of 15th century chivalry – from the court of the Dukes of Burgundy. The challengers first arrived inside a movable forest topped by a castle made of golden paper and the Great Wardrobe was ordered to produce all manner of splendid trappings, such as the new banners to hang from the royal trumpeters’ instruments. Then the jousts began, between defenders and answerers, all of the ‘courses’ run against each other carefully recorded. We know the results of the first day of jousts at through a herald’s score sheet, or cheque. It shows that Ceure Loyal performed best – which was Henry himself.

The aftermath was tragic of course, since the young prince died 10 days later. But Henry would hold many tournaments, and not just for fun; the joust was a great way of wowing ambassadors.