Written chronicles are far and few between until we arrive at the time of Alfred in the 9th century. There are 3 big ones, and you can link to them from here with the wonders of the interweb. 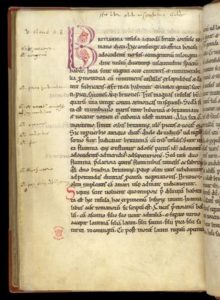 Gildas probably wrote his main work around 543, though there are arguments even about that and estimates that run from 490 to 520. It’s not really a history, or a work intended to inform later generations – it’s more of a bitter rant, a sermon, a lecture, briefly describing the history of Britain from the time of the Romans’ departure, and then criticising the British kings and clergy for their failings and sins, which has led to the dreadful punishment that is the Adventus Saxonum, the coming of the Saxons. He only uses history as a stick to beat his people with, to demonstrate the link between their sins and the disaster. It is from Gildas that we learn of names that are semi or possibly wholly legendary, and which are constantly challenged now. Gildas seems to get many things mixed up; the lack, or confusion of dates makes folk tear their hair out, and the fact is that his purpose is not really to give a detailed and accurate history or chronology. Instead it is to give those responsible for this disaster, as he sees it, a right old tongue lashing. But Gildas himself is evidence of the continuing survival in his time of the Roman tradition of learning; he had clearly had a Roman style education, and refers to others as having been similarly educated. There’s no doubt also that Gildas, writing close to 150 years after the last legion had left, still felt himself to be part of the Roman world; it’s a very British version, Gildas views everything from a British viewpoint, but it is in the Roman tradition none the less. And Gildas was not a fan of the Saxons, not a fan at all.

Find a translated version of the work by following this link: On the Ruin and Conquest of Britain

Bede was a historian and theologian, and without doubt the best source for the period up to his death in 735. But bear in mind that as far as the migration is concerned, even Bede is a very remote commentator, writing 2-3 hundred years after the events. He was a monk, based in the Northumbrian kingdom in the monastery of Jarrow. He was a theologian of European reputation, with over 30 written works to his name, but the one we all focus on is the ‘Ecclesiastical History of the English peoples’, and do note the title; there’s plenty of secular stuff in Bede, but his focus is Christianity and its triumph. Also, he’s very much the Northumbrian; and this means he has a bias – his focus is not the kings south of the River Humber, i.e. most of the Midlands, Southern and eastern England.

Bede feels almost like a modern historian in his critical and analytical approach, but his purpose is not the same as a modern historian. His aim was to record the rise and fate of heresy, to build models of the good Christian ruler and cleric, to demonstrate the working of God’s judgement. There’s a line which gives a flavour of his attitude. Bede has been talking about how the late Romano British nations descended into gross moral turpitude – quote:

‘giving themselves up to drunkenness, hatred, quarrels, and violence, they threw off the easy yoke of Christ’

And invited in the Saxons to fight their battle for them. Bede then notes:

This decision, as its results were to show, seems to have been ordained by God as a punishment on their wickedness’

Bede is thoroughly medieval in other ways, devoting much space to miracles, fantastic events, and it’s an ecclesiastical history remember – much time is devoted to the goings on of the church and conversion. And of course, the information he had available to him was limited, diffuse and no doubt conflicting. As it happens the monastery at Jarrow had the benefit of a large corpus of original material gathered together by a predecessor there, but none the less the gaps are obvious and wide. One of Bede’s greatest achievements was to make sense of all the fragmentary sources he had available to him into a coherent whole.

It is Bede that gives us the seminal passage that describes the origin of the Germanic invaders, which despite all the picking away at it has remained remarkably resilient – the Angles, Saxons and Jutes. You might also be interested to know that it’s Bede that invented the chronological protocol of Anno Domini.

Find the text by following this link: Ecclesiastical History of the English peoples

The Anglo Saxon Chronicle was probably commissioned by King Alfred the Great in the 9th century. It purports to describe the history of the West Saxons from the earliest days.

The Chronicle is in fact plural; from one original, the chronicle was distributed to various monasteries around the kingdom, whence they begin to diverge, in the sense that they add locally relevant content.

Alfred took the time to build a vision of what the Anglo Saxon world could be, to give it a shared history and sense of purpose, to build the unity of the Anglo Saxon peoples. So strong was that purpose, that the chronicle kept going for close to 100 years after the Norman Conquest.

The ASC is an amazing document, which gives the core of our chronology and information right through the AS age. But in these early years it is deeply suspect; many commentators argue that what we have here is back formation; the re-invention from a later age of what Anglo Saxons thought they’d like their history to be, to justify the social hierarchy and kingly authority of their present. Its genesis is in recording the success of the West Saxons, the house of Wessex – so at times other kingdoms can look like bit part players, or in the earlier years at least. None the less it’s an essential and unique source of information

Nennius was a Welsh monk who wrote in the late 8th century, although actually Nennius’s authorship is in doubt. It’s a rather difficult source, full of speculative events which make it difficult to sort the wheat from the chaff. For the most part it’s the genesis of the legends of King Arthur – the fight of the red and white dragon, the tyrant Vortigern, the legend of Emrys, who could be Merlin or Arthur or both.