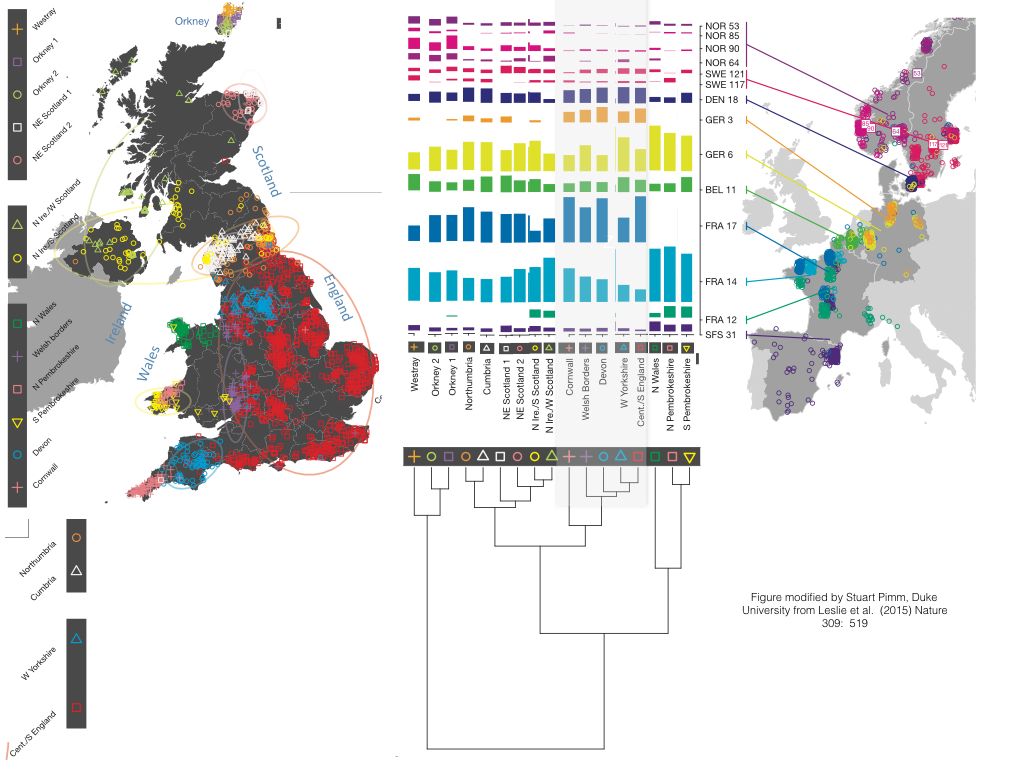 There’s a fascinating article by Leslie et al. and map created by a research project funded by the Wellcome trust. It’s all about creating a genetic map of the British Isles, to challenge or maybe confirm all those stories we have in the British Isles about where we come from.

It’s always a little dangerous of course to pick up an article from the paper, since I can’t claim to have a proper handle on the intricacies of the research but it’s definitely worth a read. The thing is that it seems to chime with so much of our received history; as well as providing a few insights.

And then Stuart, a History of England listener, and clearly a man with a brain has also done some work looking at the data, and representing some of it much more clearly. The image allows you to see more of the detailed European origins data collected correlated with the British data.

The broad conclusions seem to be that:

There’s more detail below if you want to read on – and of course nothing beats going to the original paper! The conclusions lifted from the paper with some comments from me…

So that’s interesting. It confirms the idea of the Anglo saxon invasions, but also debunks the idea that the invaders wiped out the British population. Some of the variation about what percentage comes from how you interpret the DEN18 and FRA17 data; it could be that these are influenced by the data about saxon migrants – and if so the percentage of Saxon migrants would be much higher, up to 50%. I was tempted to think that FRA17 could be something to do with the Normans, but apparently this is a genetic marker very widespread in Britain (except Wales), and very early – so more likely to be from early Anglo Saxon markers. There is no significant, distinctive marker from the Norman invasions.

The Orkneys sound worth more than a few studies of their own! on a sort of cross roads for travellers and invaders from Scandinavia.

I’d seen an earlier study that did show groups that seemed to correspond with Bede’s divisions. No longer it seems! And you’ll notice there’s no room in this for the Jutes!

The Norman invasions of southern wales from the 11th century?

The original article is attached here, with some helpful highlights for key bits from Stuart!

9 thoughts on “Origins of the British – a recent study”