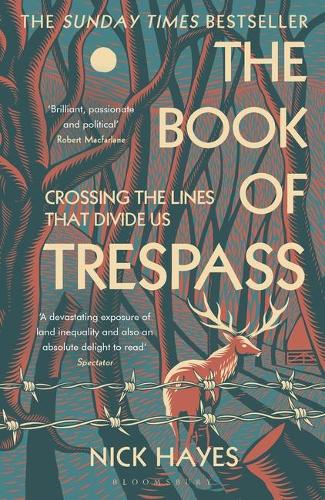 The Book of Trespass: Crossing the lines that divide us
Nick Hayes
Bloomsbury
August 2020
Paperback
372

‘Private Property – Keep out’ is a constant sight in the English countryside. It has always infuriated me. And now, after reading Nick Hayes’ thoroughly fascinating, engaging and challenging book I think I know why. Because the attitudes that created that sign are intrinsically unfair, unfounded and damage society every day by needlessly excluding us from the land.

I loved Nick’s book for large passages, it challenged me and made me uncomfortable – and annoyed me a bit in parts. Which is what a good polemic should do I think – and this is deeply political, deeply polemic. The basic thesis is this – that our private property laws in England are designed to exclude us from the land to which we once had a right and should have a right again.  Once upon a time (as you’ll know from the History of England podcast), and for much of our history, we have recognised that land ownership is qualified – yes there is an owner with ultimate rights, but the community also has rights of access over it. Slowly up landowners have eroded those rights – until there is precious little left – we are excluded from 92% of land and 97% of waterways. The process whereby we have been removed from the land is long and arduous and based on violence – enclosure, brute force, or legislation by the propertied classes, who have made laws for centuries in their own interests.

It simply doesn’t need to be like this – other societies, like Norway, Sweden, Austria – and now Scotland have proved that giving everyone a right to roam is perfectly manageable. Whenever I talk about a Right to Roam the response is almost always a tiresome ‘Huh, you won’t mind if I came into your back yard then’. Well of course privacy, sensitive sites and so on are protected. And look – all those other countries don’t seem to have gone up in smoke, do they?

To be honest there were a few things I didn’t like in the book; there are poor interpretations of history (Anne Askew didn’t die simply because she was a woman; Witchcraft prosecutions were not just an attack on women, for example). There’s constant stream of fury over historical injustices – with no context or attempt to understand why societies thought or behaved that way in the past. I do not believe history is about making judgements on today’s moral code, it gets in the way of the real task – understanding. Understanding, so we can make society a better place based on that knowledge. Nick’s demand is that we should be ashamed, it feels almost like religious fanaticism – we must stand in white at each corner of the churchyard to be whipped for our sins before we can deserve to make society better. For that reason, I fear the book will speak only to Nick’s constituency – and not, as he clearly wishes, help us to ‘cross the lines that divide us’. Personally, I think guilt and shame has no part in designing a better future, they simply obscure and divide, I refuse to be held responsible for the actions of my ancestors. Let’s change things for the love of it and the love of all of us.

But what I did love is that Nick’s book is also a wonderful book about nature, about folklore; it’s intellectually powerful, blending thinkers from all sorts of fields. It is just delightful in its description of his days trespassing in countryside seen only by a small group of the very rich and their employees – a real sense of his love of nature, a sense of discovery on land and waterways. I am nowhere brave enough to emulate his trespass – I am by nature deeply compliant, which is maybe one reason I admired Nick’s work so much. In those passages, we escape from the anger and reach the way things could be, and the beauty we could all share.

There were some big moments for me.

What should we campaign for?

Safety in numbers I think! Join Jarvis Cocker and Stephen Fry and make yourself heard. There are great organisation out there you can support:

Nick Hayes is involved in a website here you can find resources, ideas and take part in events https://www.righttoroam.org.uk/

The Ramblers Association is a large organisation of 100,000 members, which supports the right to Roam – join up, they offer lots of activities and information. https://www.ramblers.org.uk/

The Open Spaces Society has been defending our access t the countryside since 1865; it’s the home of William Morris and Octavia Hill. They are brilliant for advice and support on rights of way