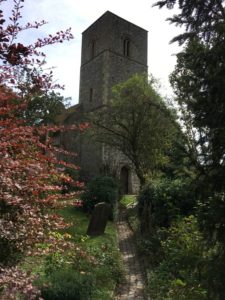 St Mary’s church at Houghton on the Hill looks like a reasonably typical small rural church. But it’s history tells the story of a village; and inside were discovered the oldest surviving Anglo Saxon wall paintings in England.

There I was, looking for South Pickenham church – got hopelessly lost, until I saw some signs to a ‘historic church’ which I followed to the middle of nowhere, and up a dirt track.There I found a lovely little church, all on its own, in idyllic countryside soaking up the sun. But the most incredible thing was what lay inside. There I met 87 year old Bob Davey who had rescued the church from a ruin. It had been open to the elements, used for midnight gatherings by Satanists, and targeted for demolition. But Bob, his wife Gloria and friends spent years with their own time and money to save a church which was still consecrated ground. 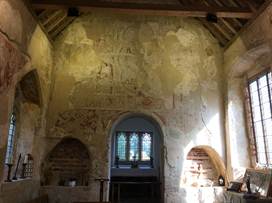 Discovery of the 9th Century paintings

Then one day, as he was working on the old plaster, Bob discovered that underneath the top layer were paintings. And not just any old paintings – 9th century Anglo Saxon paintings. Incredibly rare survivals – in fact the earliest in all Europe.

With that, at last help began to come, and the church is now restored, with thousands of visitors every year to this wonderful church.

In Medieval England, very few were literate; certainly only the priest would have read the bible. The mass was conducted in Latin, and knowledge of the bible story by the congregation was limited.

So the wall paints were not just for decoration, or even for the glory of God; they were there to educate, to tell the Christian story. For example, over the archway  to the Chancel was the story of the Last Judgment. At the top is a 3 part ‘mandorta’, showing the Trinity; below them to the left are the upturned faces of the saved.

Then below is a curious series of images – of the saints, looking as though they are holding a rolled up sheet, or out-sized set of scrolls. In fact was what these might well be are snakes, representing the devil. On the left hand side, the saints are fighting the powerful symbols of the Devil; on the right the snakes are weak, defeated.

And down on the far left hand side is the image of the Crucifiction, and the raising of the dead. The 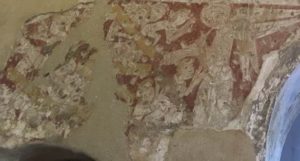 pictures show great energy and robustness as the dead force their way towards the figure of Christ on the cross.

Social history
Like all churches, St Mary’s is also a physical transcript of the social history of the village and area. This church still has early Anglo Saxon Walls. It has seen the pagan Viking invasions, and became part of Danelaw – where Viking influence can be seen in the faint image of the Devil – with the features derived from the trickster, Loki.

Then the good times came and village boomed, and became the largest village in the area, and St Mary’s the largest church in the area. The Church grew, and you can still see the marks on the walls and the foundations in the grass of it’s success. An extension was built to the Nave on the south side. The priest had a well populated parish, and so built a larger Chancel – with more living space for him too. by 15th century, the new square tower completed the prosperous picture.

But then came the changes of the 15th and 16th centuries. With a falling population after the Black Death, the constant return of plague, demand for grain fell. Landowners turned to sheep, and just as Thomas More protested in Utopia, the ‘sheep ate the people’ – fewer were needed to tend sheep than to farm grain. And so the village declined – and by 1603 had only 15 communicants, by the 18th century just a couple of houses remained.  St Mary’s troubles continued – in 1916, a Zeppelin dropped a bomb which cracked the tower; and finally in 1924 the estate decided to turn all the land over to a shooting estate so the remaining villagers all left, leaving the church alone and deserted.

You can read more at the church and village website about the church, it’s history, the village history, the paintings; even about Robert de Neville, put to death and buried in 1280 for having an affair with a married woman.

2 thoughts on “The Discovery at St Mary’s Church”