‘…they said openly that christ and his saints slept’. This stunning phrase gives us an image of devastation hat led to the period being called ‘The Anarchy’. In this episode, we look at how the Stephen came to power and how the whole thing started.

Click and play podcast: 32 When God and his Saints slept

Henry had made everyone swear allegiance to Empress Matilda. But clearly everyone hand their fingers crossed behind their backs at the time, because Stephen really doesn’t find it that hard to take the throne. Basically, no one wanted a woman on the throne, and no-one wanted to have anything to do with the Empress’s husband, Geoffrey Plantagenet, Duke of the traditional enemy Anjou. And anyway, the Empress is too busy invading Southern Normandy to claim the throne.

So Stephen was crowned by The Archbishop of Canterbury in December 1135. Meanwhile, the Norman Barons firstly asked Stephen’s brother Theobald to be Duke – and then opt for Stephen when they hear that he’s seized the throne in England.

The first few years are actually a good deal smoother than they were for Henry and Rufus. Stephen bases his power on alliance with the Beaumont family, Robert of Leicester and Waleran of Meulan, and removes three bishops who he fears are plotting against him.

But Stephen fails to bind two key men to him – Robert of Gloucester and David, King of Scots. And in 1139, things start going wrong. Robert and David declare for Empress Matilda. Geoffrey invades Normandy.

Click here to see the coronation charter that Stephen signed up to. 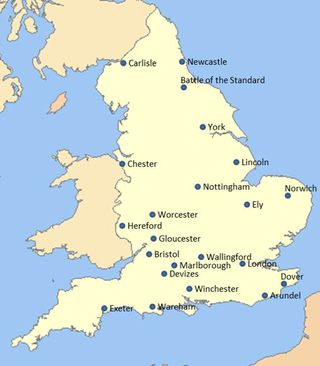 Fought outside Northallerton, David King of Scots and 26,000 men invaded England to make Northumbria Scottish and advance the cause of the Empress Matilda. After a victory at Clitheroe, David was faced by an English Army, grouped around a hill, on top of which sat the English Standard. Most of the English knights dismounted and faced the Scots in a mixed line of knights and Longbowmen. The Galweigan charge was broken by the archers, and the resulting English counter attack was unstoppable. The resulting treaty of Durham in 1139 was generous to the Scots – but by this stage, Stephen needed a quiet northern border.

The trouble is, the treaty gives Carlisle to the Scots. The super-powerful Ranulf of Chester felt that belonged to him.

The Empress escapes from Arundel

Robert of Gloucester and Empress Matilda times their revolt poorly. By the time they arrived at Arundel, David had been defeated, and Matilda was trapped by Stephen in Arundel. But like an idiot, Stephen allows his brother Henry to talk him into letting Matilda go. Oh Please.

Robert of Gloucester was joined by Miles of Gloucester, Reginald of Cornwall and Brian fitzCount, lord of Wallingford. Together, their power in the South West was formidable. With revolts by Nigel in Ely, and Dover castle held against the King, the battle lines were drawn.

2 thoughts on “32 When Christ and his Saints Slept”