In 1340 against all the odds – of numbers and quality – Edward defeated Philip VIth's Great Army of the Sea at Sluys. The impact on morale, English and French was dramatic. But none the less Edward's campaign still failed at the walls of Tournai, and his problems of debt and discordant allies rose like a flood around him. 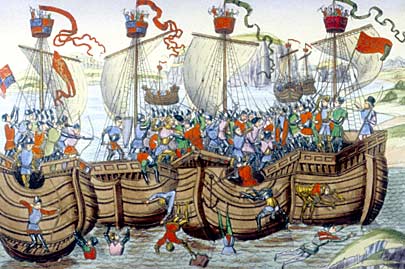 Edward was in Ipswich with his great council in June 1340, when the news came that Philip VIth's Great Army of the Sea had brutally taken the Flemish port of Sluys. The plan was to keep Edward and his allies apart, and with the uncertainty of finding ships at sea, the French took the approach of blockading the main Flemish port.

Edward had to get to Flanders before his alliance fell to pieces, and before the campaigning season came to an end. But the Archbishop of Canterbury, his admiral John Crabbe and his Great Council were vehemently opposed – the odds they said were too great. Edward was furious, and determined to attack.  He lectured the Great Council:

‘You and the archbishop are in league, preaching me a sermon to stop me crossing! Let me tell you this: I will cross and you who are frightened where there is no fear, you may stay at home’

The Council were right of course. The French Fleet was wildly superior in both size and quality, on paper. The French had 213 ships. Most were Cogs, but they also had a core of oared Genoese Galleys; the Grimaldi of Monaco had also worked for the French  crown with Galleys like those in the picture. Plus they had royal Cogs designed for war, and a massive complement of sailors and soldiers – 19,000 on them.

By contract, Edward's fleet was much smaller at between 120 and 160 ships, and were entirely made up of Cogs, merchantmen pressed into service. 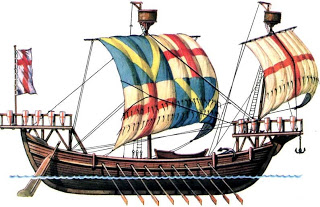 The French had blocked the harbour of Sluys by putting their ships into 3 lines across the entrance to the harbour. The first line held their largest Cogs, Royal barges and Galleys

Edward delayed his attack to make sure the enemy could not come out the the harbour and flank him, and to make sure the sun was in the faces of the French crossbowmen. Then he led the attack, in his flagship the Cog Thomas. They went straight for the French Flagship, the Cog Christopher – ironically, an ex English ship captured by the French.

The fighting was hard and brutal – for 4 hours the two fleets fought. Edward was wounded in the thigh, and reduced to shouting orders from the Thomas, and the Christopher. As Froissart recorded:

‘It is indeed a bloody and murderous battle. Sea-fights are always fiercer than fights on land, because retreat and flight are impossible. Every man is required to hazard his life and hope for success, relying on his own personal bravery and skill’

At around 7 pm, the second line of French ships saw the English breaking through the first line – the English had beaten the biggest and the best of the French fleet.

The weakness of the French strategy then became clear – having beaten the best of the French fleet, hammering the 2nd and 3rd lines was never in doubt, though hard. In the rear, the Flemings, seeing how it was all going, launched their boats and attacked the Norman Merchantmen who made up the third line.

The result, and why

The result was a massive English victory, so complete because so few French ships could escape. As many as 16,000 French seamen and soldiers died. So why did they lose? Well…

Were less dramatic than you might think. It was NOT the end of French presence in the Channel. It was not the end ot French raids on the south coast. But it was the end of French dominance of the channel, which had til then seemed very close. And it made a world of difference to morale – the English suddenly saw they could win, the French that they could lose. Edward at last had a success to build on.