In 1461 the Queen failed to seize London,and retreated to the north. Warwick and Edward walked through London's empty gates and then chased north for the largest, and bloodiest battle of English soil. 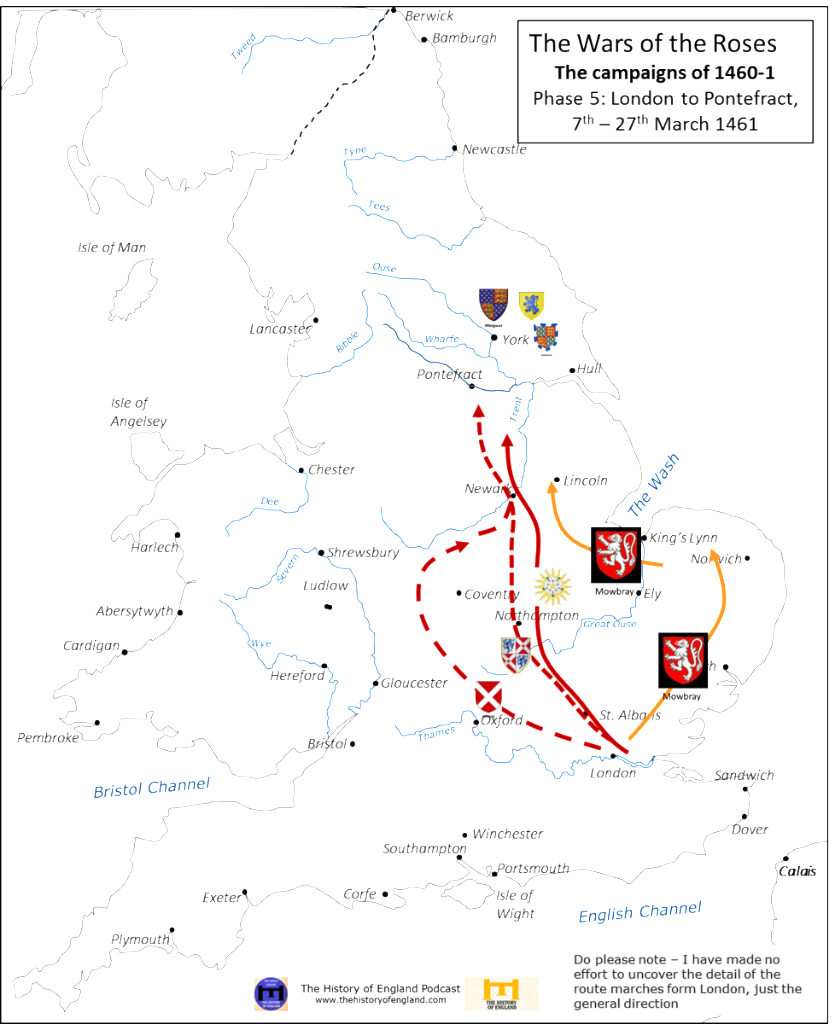 After the victory at St Albans over Warwick, the queen lost her nerve, and failed to seize London. As Edward and Warwick met in the Costwolds, her opportunity vanished, and her army retreated north to York. Edward and Warwick marched their newly revived army and fortunes into London, to be greeted by enthusiastic crowds. Edward was acclaimed king in Westminster Hall.

The Yorkists left in groups; Norfolk left to raise an army in East Anglia; then Warwick on 7th March 1461, to sweep by the West Midlands to raise his tenants as he went. Next Fauconberg with the footsoldiers and last Edward on 13th March. By the time they reached the castle at Pontefract they were re-united, except for Norfolk, who was a  day behind.

The Yorkists had to cross the River Aire at Ferrybridge, but were attacked by Clifford and his troop of 500, the 'Flower of Craven', reivers from the borders. Fauconberg outflanked Clifford by crossing upstream at Castleford, catching and slaughtering Clifford and his men just a few miles from Somerset and his main Lancastrian army. Edmund of Rutland had been avenged. 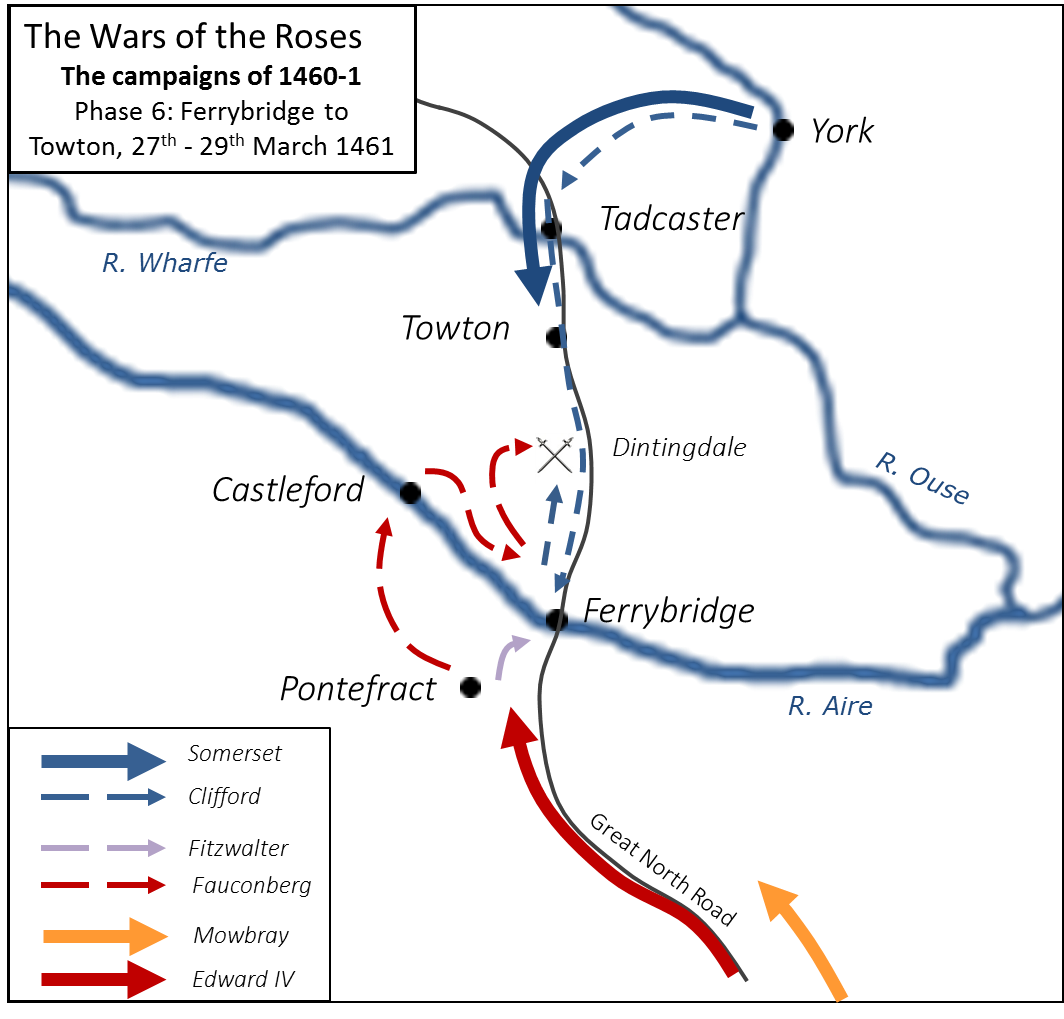 Now that the river crossing had been forced, Edward was able to march up onto the way to York, where near Towton he came face t face with Somerset and the Lancastrians, while Margaret and the king waited anxiously in York 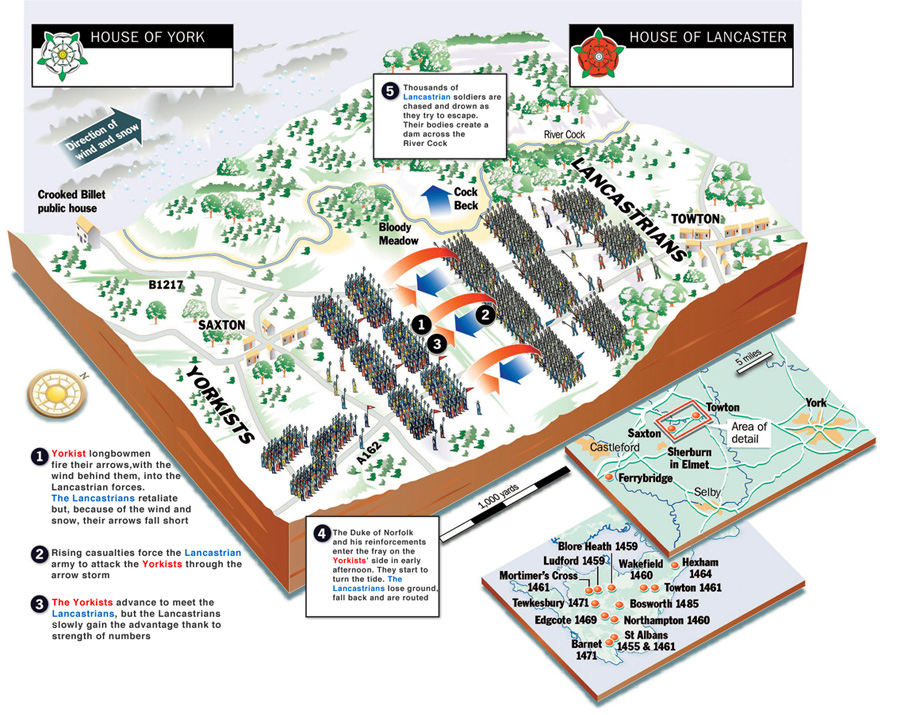 Famously, Towton was the biggest and bloodiest battle fought on British soil. And it was a long, hard fought slog. During the fight, Mowbray, Duke of Norfolk arrived with his 5,000 men to attack the Lancastrian flank – even that did not turn the tide. But eventually the Lancastrians broke and fled, to be slaughtered in their thousands. Margaret and Henry fled York just ahead of the victorious new king – Edward IVth.

You can find out more at the Towton Battlefield Society; including a complete list of all the nobility we know were there!