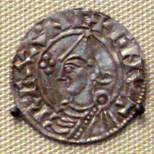 Cnut was pretty much the complete king. Conqueror of the English, ruler of a Scandinavian empire that spanned 4 countries. And a man who knew how to win the peace as well as the war. The History of England podcast this week looks at his reign.

Cnut was probably born around 990, and by 1016 had become the ruler of England. He was to rule for the next 19 years, and in the main his years were so full of boring peace, prosperity and lack of discord that the chroniclers could find little to say about his rule

Cnut’s marriage to Aethelred the Unready’s widow, Emma of Normandy, was not only an astute political move but also turned out to be a good personal choice. Astute politically because he allied himself with the English Queen; and astute personally because he and Emma shared the same aims and values. Emma was a power at court, and helped Cnut get the English Church on his side.

This was important because recognition as a Christian King rather than a pagan warrior was essential a part of Cnut’s campaign to be accepted as the legitimate successor to the Anglo Saxon dynasty. He did other things as well. He agreed with the witan to rule by the laws of Edgar.  He issued his own law code which very clearly followed his predecessors’ codes, and their policy of accepting the different customs of the Danelaw and the rest of England.

But Cnut did have his followers to reward – after all they had fought hard for him and his father for many years. So although we see nothing like the wholesale replacement of English thegns that we will see under William the Conqueror, there is a significant influx. In the early years, Cnut’s great men are all Danes – Thorkell the Tall and Eilaf the Viking for example. But over time this changes, and Anglo Saxons such as Leofwin and Godwin gain their place in the sun. Cnut also taxed England and maintained a standing army and navy with the proceeds – some indication maybe that he was not secure at least for the first part of this reign. 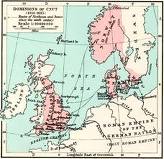 Cnut spent much of his reign establishing his Scandinavian empire – and for a short period he ruled England, Denmark, Norway and parts of Sweden. But it didn’t last long, and was to prove beyond the ability of his sons to maintain.

When he died in 1035, the chroniclers are remarkably deadpan about his passing. But he was a clever and successful man, who gave England a much needed respite after the years of Aethelred’s chaos. He died and was buried at Winchester, and should be seen as one of the most successful rulers of England before the conquest.

4 thoughts on “17 Cnut the Conqueror”