By 1387, it was becoming clear that the Wonderful Parliament of 1385 had not solved the problem. Pressure had been building, and Gloucester, Warwick and Arundel were far from satisfied – and felt far from safe. The showdown came at the Merciless Parliament of 1388.

The military confrontation – the battle of Radcot Bridge 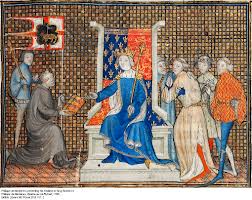 Richard tried to strike first – ordering Percy, the Earl of Northumberland, to arrest Arundel. He failed. At Waltham Cross, Gloucester, Warwick and Arundel, gathered their men and accused  (or Appealed – hence Appelants) 5 close councillors of the king as traitors and usurpers of Royal power. These were:

Most (except Brembre) ran. But de Vere ran for Chester – not for safety, but to raise an army of Cheshire bowmen to rescue the king. He came south with 3-4,000 men – but facing desertions all the way, when he met the forces of Henry Bolingbroke at Radcot Bridge his forces melted away. Oxford escaped to Bruges. Richard was forced to call parliamenty to listen to the accusations against his friends.

The political confrontation – the Merciless Parliament

They entered the parliament arms linked, and over the next few months brutally followed through on their threats. Brembre, though clearly innocent, was beheaded; Treslian was found spying on proceedings and despite his terrified pleas was also beheaded. And despite Richard's desperate pleas and those of his wife, Anne, his mentor Simon Burley also  went to his death.

By the end of the parliament, it looked as comprehensive and vindictive a victory as any in the history of England so far. But Richard would not forget.